Located on the outskirts of Fort Myers, next to one of those ubiquitous Florida planned communities (Gateway, with the requisite designer golf course), the JetBlue Park spring-training complex solves a few issues faced by the Red Sox when training at City of Palms Park: the lack of a unified spring-training experience (the minor-league camp was located more than a mile to the east, forcing players and staff to shuttle between the two facilities) and the lack of any development opportunities around the ballpark. City of Palms Park is actually a decent little ballpark, through the stress must be placed on little: landlocked in a sea of residential housing, there was no place to add capacity or other development, making the ballpark impossible to expand and forcing the Red Sox to limit capacity at a time when Red Sox Nation is still booming.

JetBlue Park, on the other hand, is a totally different experience. With berm seating, it seats 11,000 – larger than City of Palms Park, to be sure. It’s partially based on Fenway Park in some overt ways (there is a Green Monster in left field) and some subtle ways. These subtle ways make the ballpark unique – and also different from Fenway Park or City of Palms Park. The signature item to the ballpark: the white canopy, which undulates like its inspiration, the cypress mounds (or groves) in the area. Cypress mounds are an important part of the local ecosystem: they provide shelter and shade for a host of animals and birds. Here, the canopy provides shade and shelter for spring-training fans. It doesn’t run totally across the concourse: instead, it’s broken into four sections, with three overlapping. During the course of a game – especially on a clear, warm day – you’ll appreciate the canopy, as it provides shade to the majority of fans in the grandstand.

There’s also a subtler signature item to the ballpark construction: the building material found on the walls of the ballpark structure. It’s unique to Florida, says Caudle: the blocks are augmented with sea shells, and when the surface is polished, it adds a unique sheen to the construction.

And one final thing to note: unlike Fenway Park, JetBlue Park actually has a berm. Perfect for spring training.

The ballpark is also used by the Gulf Coast Rookie League’s Red Sox.

The Minnesota Twins also train in Fort Myers, while the Tampa Bay Rays train in nearby Port Charlotte. 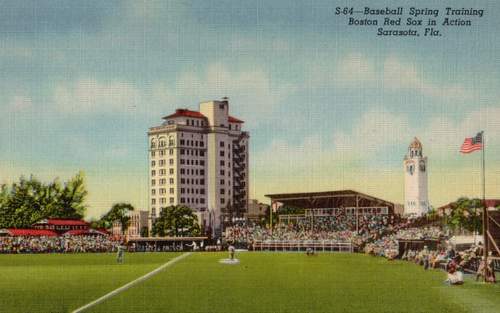 The Red Sox have been training at JetBlue Park since the ballpark opened in 2012.