The spring schedule includes a special Red Sox Foundation Game Night telecast on Friday, March 10 at 6 p.m. when the Sox host the Baltimore Orioles. This special game broadcast will see limited commercial interruptions and be preceded by a pre-game show at 5:30 p.m. that will highlight many of the Red Sox Foundation’s charitable partners.

Play-by-play announcer Dave O’Brien returns for his second season in the NESN broadcast booth. During spring training, Tom Caron will fill in during the games that O’Brien misses due to ESPN commitments. In the booth as color analysts will be Jerry Remy, who begins his 30th season on NESN, or Steve Lyons, whose fourth season with NESN will also include daily Sox analysis on all of NESN’s sports news shows during the first month of Grapefruit League action. Guerin Austin enters her third season as Red Sox sideline reporter, alternating with several other NESN reporters and Red Sox historian Gordon Edes covering spring training. 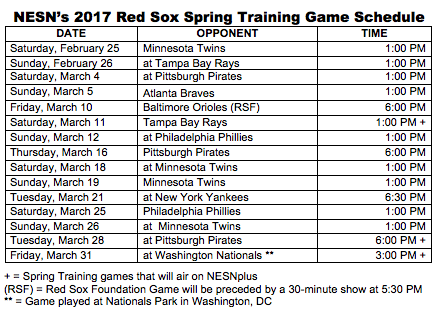